Neuropathy, also known as peripheral neuropathy and polyneuropathy, means damage to the nerves that run through the body outside the brain and spinal cord. Neuropathy is very common, and it’s estimated that at least 8% of the world population has it. The most common causes globally are diabetes in developed countries, leprosy in tropical countries, and HIV/AIDS. In the United States, there are more than 40 million people with neuropathy, and their health costs over $4 billion each year. At least 10% of people over 40 years of age get neuropathy, as do 50% of diabetics and 20% of patients receiving cancer chemotherapy. The number of people with neuropathy is increasing as the population ages, diabetes becomes more common and people with HIV/AIDS live longer. The most common type of polyneuropathy involves damage to the thinnest, “small fibers.” Awareness of neuropathy is growing, meaning more patients are being diagnosed and treated.

See the informational handout provided at the Erythromelalgia (EM) Awareness Day on May 9, 2018, at the Massachusetts State House in Boston.

The Anatomy of Neuropathy

The brain and the spinal cord make up the central nervous system (CNS). They are located in the head and in the spine respectively. The brain is the command center that receives and generates messages transmitted by the peripheral nervous system (PNS), the nerves running through the rest of the body. The nerves are like the electrical cables that connect computers and telephones permitting them to communicate over long distances.

Each nerve cell (neuron) has different parts. The cell body (soma) contains the nucleus and the machinery for making and transporting molecules and organelles to the far-off parts of the neurons, for instance toward the hands and the feet. The cell bodies of peripheral nerve cells are located in or right outside of the central nervous system (PNS). The long thin parts of the neuron that connect the cell bodies to the body parts are called axons. Axons are like wires that transmit messages over a distance. They are also like tunnels, since molecules and organelles are transported through axons to get to far-off body targets.

Nerve fibers are classified based on their thickness into small fibers and large fibers depending on how thick they are. Large fiber nerve cells have diameters more than about 5 micrometers, and small fibers are thinner. The large fibers are bigger because the axons are sheathed in fatty wrappings called “myelin”. This helps them to send signals faster than small-fibers can. Large fibers carry messages to the muscles to control our movements. They also receive and carry some sensations to the spinal cord and brain including touch, vibration, and balance. The small fibers send messages about illness and injury, including pain and itch and hot and cold. “Autonomic” small fibers also carry messages that control our internal organs.

Different cells in the peripheral nervous system (PNS) have different jobs. Motor fibers connect to the skeletal and internal muscles to signal them to contract. Sensory fibers are responsible for bring back information from other parts of the body to brain. Autonomic fibers supply blood vessels and sweat glands, the gastrointestinal organs, the urinary bladder and sexual organs. Signals from small-fiber neurons also maintain the health and function of our body’s cells and tissues. As an example, a chemical mediator secreted by small fibers (semaphorin 3a) keeps our bones strong.

Peripheral neuropathies cause different symptoms depending on which type of nerve fiber is most damaged. In general, the symptoms of polyneuropathy start first or are worse in the hands and feet since the long fibers required to connect to these far-off areas are most likely to break down.

Motor neuropathy symptoms come from the fact that our muscles don’t work well if the motor fibers are not sending the correct signals they need to function. Patients may notice fatigue or difficulty with movement (weakness), reduced size of muscles and muscle cramping.

Sensory neuropathy symptoms are usually divided into “negative” and “positive” symptoms. Negative symptoms reflect less ability to sense the world due to damage to sensory neurons. Examples can include reduced hearing (sensorineural hearing loss), reduced balance (sensory ataxia), or painless injuries. Positive symptoms mean that the sensory neurons are firing and sending false messages of sensation when there is no reason to. Examples include neuropathic pain and itch, where a person can feel as they are being cut or burned even though nothing is touching them.

Autonomic neuropathy symptoms vary a lot depending on which organ is affected. If nerve cells going to the heart and blood vessels are damaged, patients may notice low or fluctuating blood pressure or abnormal heart rate, usually fast heart rate (tachycardia). These cardiovascular symptoms can leave patients feeling weak or dizzy when they stand. Symptoms from the gastrointestinal tract can include bloating, nausea, or vomiting, often after eating, and constipation, diarrhea, of both. Many cases of irritable bowel are caused by peripheral neuropathy. Autonomic neuropathy can also affect the bladder and sexual function. 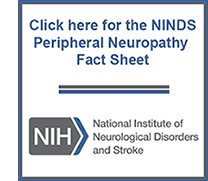