When a peripheral nerve, along its course, gets compressed between hard structures such as bone and ligaments, it is called “nerve impingement” or “entrapment neuropathy.” Impingement or entrapment can cause motor and/or sensory symptoms, depending on the normal function of the damaged nerve. Reduced strength, muscle shrinkage, and pain localized to the part of the body connected to the damaged nerve are common symptoms that bring patients to physicians. The location and intensity of symptoms depend on the specific nerve damaged, and on the severity and duration of the impingement. 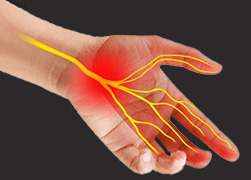 Among entrapment neuropathies, carpal tunnel syndrome (CTS) is very common. This condition affects 3 to 9 percent of people at one time or another, and is a common reason why patients visit neurologists. Women report CTS twice than as often as men do. Obesity and pregnancy, and underlying risks to nerve health such as diabetes, amyloidosis, hypothyroidism, and rheumatoid arthritis all increase the risk of CTS. Also, some occupations increase risk by stressing the wrists and hands, such as jobs where workers use vibrating tools or spend long hours at a computer. Other causes of compression include bone deformation by prior fractures, or arthritis. Ganglion cysts or other swellings in the area are less common causes. 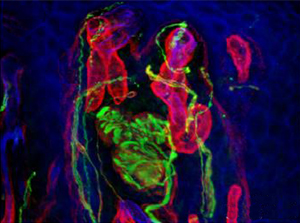 CTS is caused by compression of the median nerve, which runs down the arm to the hand. The nerve becomes compressed where it passes through in the carpal tunnel, a narrow channel between the wrist bones closed at the top by the transverse carpal ligament. CTS symptoms develop mainly but not exclusively in the hand, beyond the point of the nerve compression.  The dominant hand is more often affected, and in more than two-thirds of cases, the condition affects both hands.

Early symptoms including numbness and/or tingling in the thumb, index finger, and middle finger. Pain is intermittent, and often worse during the night. Rarely, pain is also perceived farther up the arm. If CTS persists, strength can drop as well. Patients report losing handgrip, and objects may fall from their hands. They may notice difficulty in writing or unscrewing bottle caps. Advanced untreated CTS can cause wasting of muscles in the palm of the hand near the thumb.

Diagnosis of CTS is often suspected based on common symptoms, but doctors can get more evidence by provoking symptoms in the office, such as by keeping the wrist flexed at 90° for 60 seconds (Phalen sign) or tapping the median nerve at wrist with a reflex hammer (Tinel sign). Other conditions, such as pinched nerves in the neck, brachial plexopathy, and diabetic multiple mononeuropathy can mimic CTS. For a definitive picture, electromyography and nerve conduction studies are the diagnostic gold standard. Ultrasonography, computed tomography, and magnetic resonance imaging (MRI) can help in selected cases.

Early on, splinting the wrist can help reduce symptoms. Splints are sometimes used only at night, but wearing them full-time can help more. Splints that hold the wrist in a neutral position seem preferable to those that bend the wrist back. There is no evidence for efficacy of physical therapy or alternative therapies such as ultrasound, diathermy, or magnetotherapy.

Injecting corticosteroids is often recommended, and a brief benefit may predict better surgical outcome later. However, the benefits of injections are short lasting, and repeated injections are not recommended because of possible complications. In fact, such injections can worsen median nerve damage by puncturing or further compressing the nerve, or exposing it to neurotoxic medications.

Whenever nerve compression causes severe pain or weakness, or test results indicate severe damage, surgical treatment is recommended. For CTS, this involves an incision through the transverse carpal ligament to increase the space in the tunnel and reduce pressure on the nerve. CTS surgery is an easy outpatient procedure that leads to a good result for more than 90 percent of people. In about 5 percent of cases, a second surgery is necessary if symptoms persist or recur after an initial improvement. The average time between a first and second surgery is three to five years.