As a scientist, I have been able to read many of the published papers on small-fiber neuropathy (SFN). I am impressed that the small-fiber diagnosis can tie together seemingly unrelated symptoms. I loved Dr. Oaklander’s joke, “Idiopathic means ‘we are idiots.’ If a doctor ever tells you that you have idiopathic anything, just say no."

I am a 32-year-old woman who developed "idiopathic" debilitating painful facial erythromelalgia symptoms with acute onset a couple of years ago. I have found a network of approximately 20 different people (mostly women) from all over the world just like me—confined to our homes, with symptoms localized to the face. We all have gone through a similar journey—being prescribed anti-acne rosacea topicals, antianxiety treatments, and vasoactive drug after vasoactive drug, and cringing at the suggestion that our symptoms are psychogenic. Meanwhile, we lose time while our pain and flushing become more refractory, until our doctors tell us what we already know—“You have a chronic pain condition.” 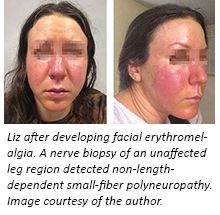 After reading the recent research, I had punch biopsies in my leg (where I have no symptoms) that confirmed non-length-dependent small-fiber neuropathy. I am the only one in my network who has had such a biopsy or neurodiagnostic testing, but I am urging others to pursue this direction as the research evolves. When I opened the biopsy letter and read my results, I started crying—after being on the merry-go-round so long with doctors who often use the words “stress” and “anxiety” in their medical notes, now I have objective evidence that my pain isn’t psychogenic.

I am very grateful to be currently trying IVIg (which the positive SFN biopsy made possible). I recently had a one-hour “test” lidocaine intravenous infusion and responded well, with temporary relief of flushing and burning (again, an opportunity facilitated by the SFN result). I am so thankful, and cautiously hopeful, that my body can remember how it feels to be pain-free.

Just as scientists are discovering that fibromyalgia (unfairly associated with “hysterical” women) is often rooted in (perhaps dysimmune) neuropathy and not the muscles, my gut says that maybe idiopathic burning faces (which have different diagnoses, as “facial erythromelalgia” is a controversial diagnosis) might also be rooted in the nerves (perhaps dysimmune) and not the blood vessels as usually thought. In my opinion, the parallel would be almost poetic—women make up the majority of both fibromyalgia cases and burning faces, yet commonly experience a bias against them when it comes to the treatment of chronic pain. I honestly had no idea how bad this bias was until I experienced it firsthand.

When I am stressed, I read obsessively—and since I am fighting to get my life back, I dove deep into the medical literature on SFN. As a patient who is suffering, and also as a young female scientist myself, I appreciate how the MGH team is not tiptoeing around but instead presenting new ideas and using bold words like “epidemic,” and “under-recognized.” Please know you have already changed the conversations I am having with my doctors for the better.

I’m sharing my story on the Neuropathy Commons website in hopes that it might spark an idea for someone with similar struggles. It makes me queasy to think that people like me might go for decades with doctors tackling the wrong issues, and making referrals to everyone but neurologists.