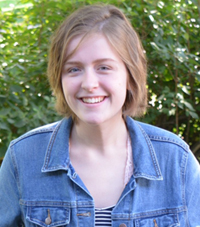 When attempting to put my medical journey into words, I am always faced with a somewhat daunting realization. While I am only almost 15 years old, my medical history manages to feel like it’s been going on for millennia. This becomes even more remarkable when I think about the fact that this chapter of my life started in 2014. So that’s where I’ll start, squashing what feels like a thousand years into a thousand words.

Until October of 2014, my most drastic medical encounter had been the removal of my appendix, a loss I was not quick to mourn. After that, the story changed. I had played an orchestra concert in the morning, but as soon as I got home I was met with a pain in my abdomen that made me realize perhaps I should have mourned the loss of my appendix, if only to repay it for its generosity in sparing me pain like the pain I felt that October.

By the end of that day, I was admitted to Children’s Hospital of Pittsburgh. After yet another admission, and weekly doctor’s appointments, I was misdiagnosed with “reflex neurovascular dystrophy,” something that, if it were commonly known, would have been commonly known as RND. RND is a generalized chronic pain disorder, and the theory is that your nervous system gets caught in pain cycles, effectively meaning that any pain felt due to an external source would continue to be perpetually felt even after the external cause was removed. In order to treat this pain cycle, one must undergo extensive physical therapy. Until May of 2015, I did outpatient therapy four days out of every week. Come May, I still had not seen much improvement, still maintaining an 8/10 pain level, so I transferred to the three-week inpatient PT program at the Children’s Institute in Pittsburgh, Pennsylvania.

The people at the CI were excellent, and I made friends that I am still in contact with to this day; however, I still left feeling dissatisfied, as I had not seen a significant reduction in symptoms. Shortly after, in June of 2015, I moved to Oregon, which granted me a new set of doctors, and new avenues to continue to explore the cause of this intractable pain. That winter, I was diagnosed with both arrhythmogenic right ventricular dysplasia (ARVD) and postural orthostatic tachycardia syndrome (POTS), which are both heart-related disorders. ARVD is an unfortunate strike of genetic luck, and POTS is a dysautonomic disorder.

During that time, I visited many doctors to attempt to figure out the source of my pain. I visited a rheumatologist, did more physical therapy, saw the Infectious Diseases department, and probably more that I can’t recall now. None of these visits yielded results, though, leaving aid for my pain frustratingly MIA.

That winter, I was also diagnosed with hemiplegic migraines, which was the first step in connecting the dots to eventually correcting the misdiagnosis of RND. This step took the form of putting me in contact with a pediatric neurologist at Doernbecher Children’s Hospital in Portland, Oregon. After seeing her for migraines for a while, and beginning to get those under control, about June 2016 my neurologist shifted gears to my generalized chronic pain.

She suggested undergoing autonomic testing and a skin biopsy, as my constellation of symptoms seemed to match up to that of a little-known disorder called small-fiber neuropathy. While my autonomic testing came back relatively normal, it was noted that I had POTS, a syndrome accepted to be a result of askew autonomic function.

Then came the day of the biopsy. It’s hard to explain without sounding a bit too sixth-sense, but walking into that appointment, I felt as if the pieces of the medical puzzle I had struggled with for so long were finally starting to fall into place. The test itself only took about 15 minutes, but those minutes were arguably some of the most productive of my entire almost 3-year-long journey.

We didn’t hear back from the hospital. Fast forward a few weeks, and still no news. A few more weeks, still nothing. Then, finally, in September of 2016, I was headed home from a rehearsal of my high school’s production of Once Upon a Mattress when I found out that my skin biopsy had shown signs of neuropathy.

At that point, my neurologist explained that she was unsure of how to proceed, and referred me to Dr. Oaklander at Massachusetts General Hospital. This appointment took a while to get, but eventually I got one scheduled for March 16, 2017. When the day came, I flew to Boston from Portland, an approximately six-hour flight that was particularly grueling considering how much opportunity was contained within that one appointment.

Walking into the office at MGH, I had the same feeling I did the day of the biopsy. Things felt right. That’s not particularly eloquent, but it’s honestly the truest way I could express how I felt that day. I came out of my appointment, which had lasted about 2 hours, with more answers in my arms than I knew what to do with. The appointment was largely talk-based, as a lot of the tests had taken place in Portland, but Dr. Oaklander also conducted a test meant to quantify the severity of my nerve degeneration.

I was diagnosed with a nervous system-specific autoimmune disorder, manifesting in the form of small-fiber  polyneuropathy. Pending approval from my neurologist in Portland and my insurance, we constructed the plan to begin treatments of intravenous immunoglobulin (IVIG). IVIG essentially makes it harder for your immune system to attack your nerve fibers, thus allowing them time to regrow, which lessens the symptoms of neuropathy.

As I’m writing this, I am on the second day of my second round of IVIG, and I have already seen significant improvements. I am able to do things that I hadn’t been able to since 2014. I can now bike, swim, and in general do far more than I ever remembered being able to.

To anyone else who is going through something of this nature and waiting for a diagnosis, I have two things to say. First: They call us patients for a reason. It takes patience, but you will make it through this. Second: If a diagnosis doesn’t feel right to you, keep going. Get a second opinion, a third opinion, even a fourth if you need it because, trust me when I say this, when you find the right answer, you’ll feel it. You have to believe that even if there aren’t answers today, there will be tomorrow. To quote Abraham Miller, “A man begins to die when he ceases to expect anything from tomorrow.”

To put it in the way I best like to consider it: A person can begin to live when they begin to expect that tomorrow will be better.